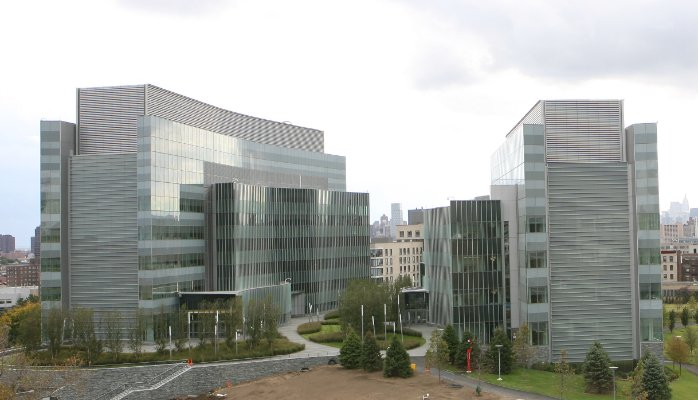 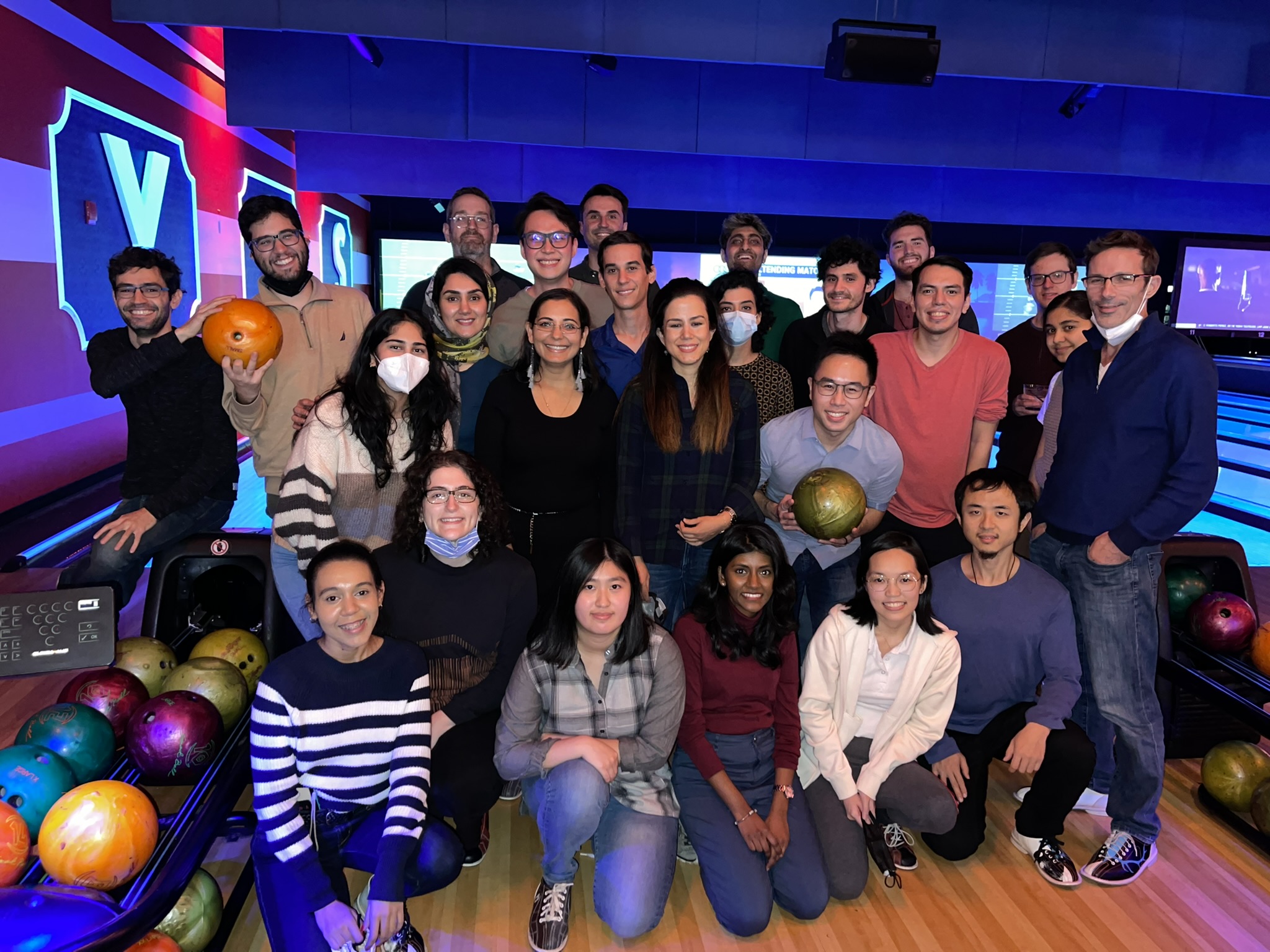 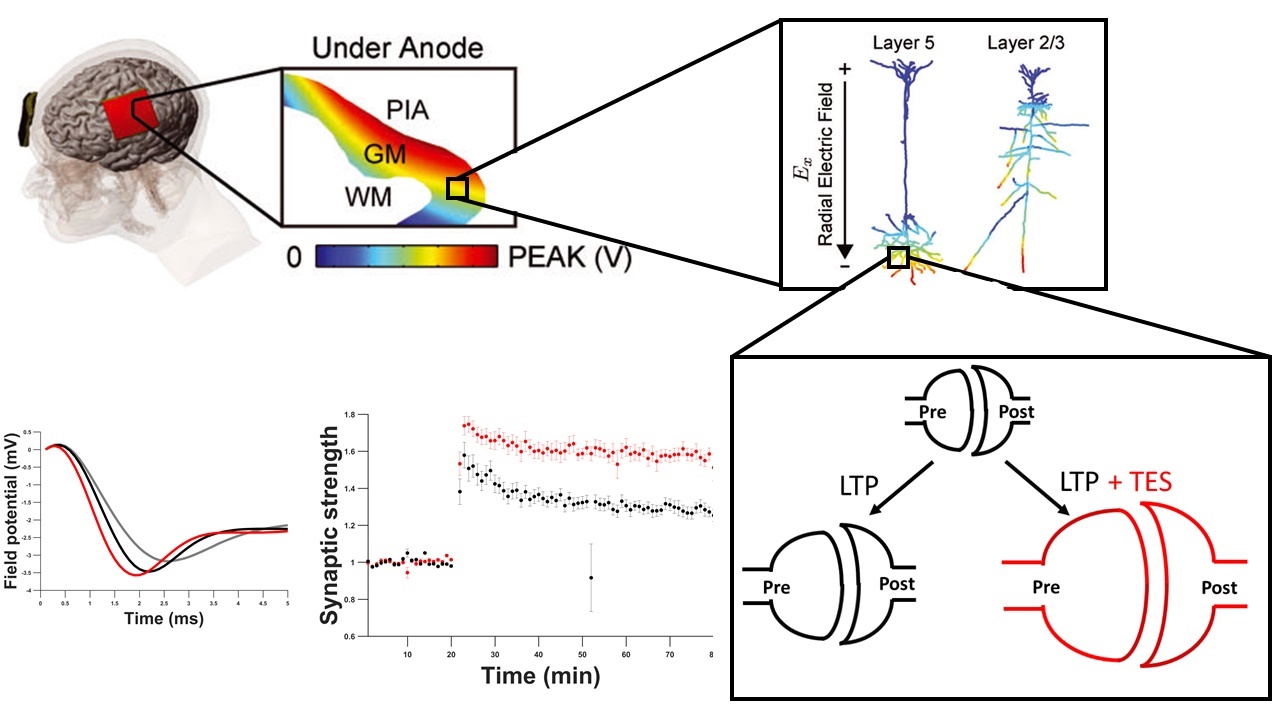 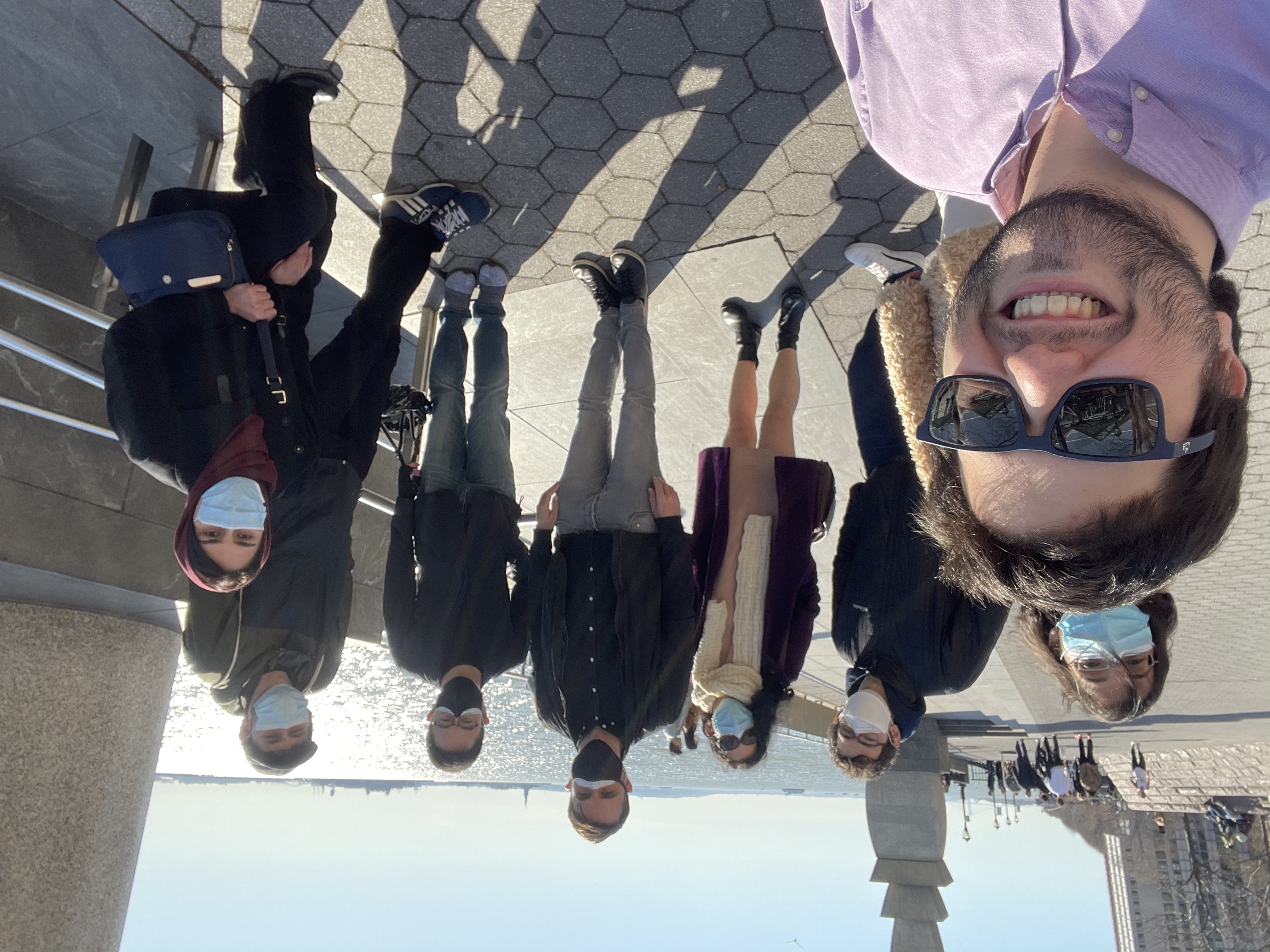 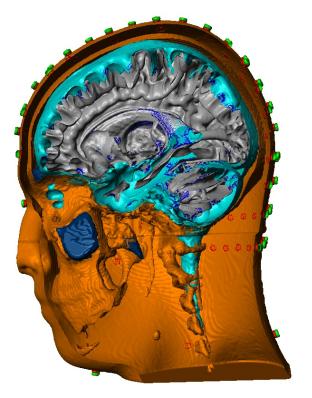 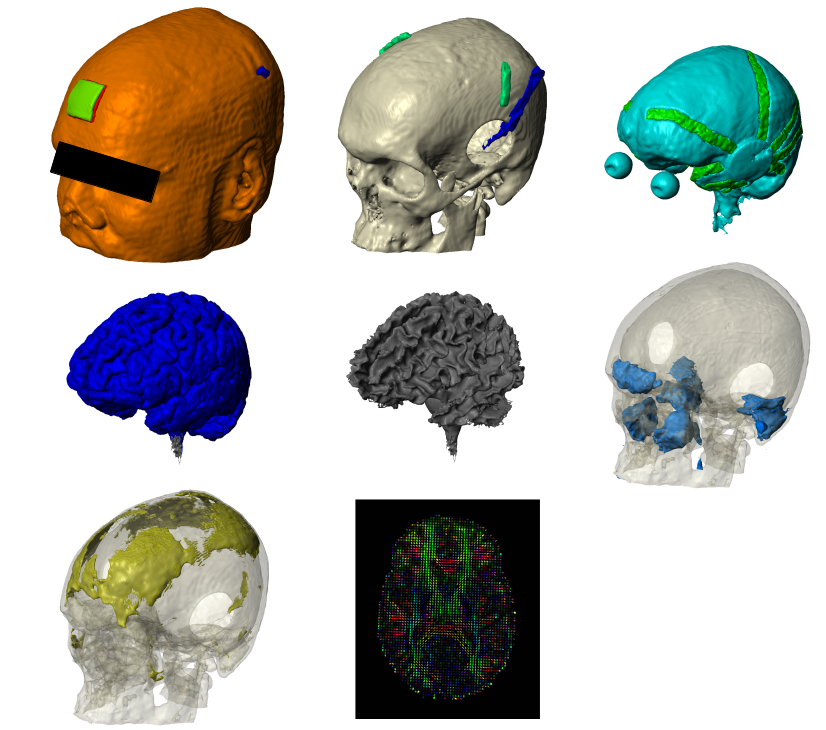 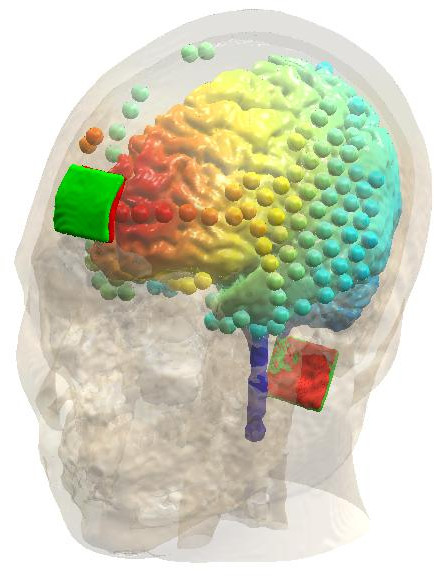 The Parra Lab works at the intersection of brains and machines. Current areas of interest are the effects of movies, speech, music and video games on body and brain; the effects of transcranial electrical stimulation on learning; and machine learning methods for medical imaging.

We constantly recruit subjects to participate in studies for research. For example, some of our experiments involve watching videos or listening to stories while we record EEG signals. Please contact us for more details regarding current studies open to subjects.

New paper published in Brain Stimulation: Robust enhancement of motor sequence learning with 4mA transcranial electric stimulation.
The lab was awarded an 5-year NIH R01 grant to study effects of electric brain stimulaiton on motor learning. Work of Forouzan Farahani and Gavin Hsu, in collaboration with John Martin.
We are launching an online seminar series on AI for Breast MRI.
Best poster award at the International Mind, Brain and Education Society Conference 2022, Montreal, Canada. The posters is on our resencent work on online video instruction (see poster).
Radiology Society of North America features our recent work on segmenting breast tumors with big data.
NSF funds our 3 year project that studies remote video-based instruction.
Preprint available for our study of tDCS effects on motor sequence learning.
PNAS front matter: How stories and narrative move the heart—literally. This is a nice overview of latest research on heart rate and stories.

First in-person talk since the pandemic; at the ECE Department of the University of Maryland: "Brains on video, speech, music and video games". It's an attempt to have a conversation with the audience instead of the usual 1h-long monolog.
The study of Madsen et al. on heart rate made it into the Wall Street Journal: "Storytelling makes hearts beat as one".
Short segment on study the study of Madsen et al. on heart rate in the posdcast "The Smart 7", which happens to be a fun collections of 7 science news items every week: "September 26th episode (jump to 9:15)".
News story in PNAS about our latest study on the heart: "When listeners pay close attention to stories, their heart rates synchronize".
We show that listening to stories synchronizes heart rate, in this publication from Madsen et al. in Cell Reports. Here is our CCNY Press Release. The story was picked up in a few news outlets: Science Daily Press Release, US News, IFL Science, Science Focus Magazine, ZME Science, Cosmos Magazine, The Hill, Neuroscience News, Good News Network, Technology Network Neuroscience, Actualitte (French)
New paper published in Brain Stimulation: Cutaneous Sensation of Electrical Stimulation Waveforms.
New paper published in Brain Stimulation: Effects of direct current stimulation on synaptic plasticity in a single neuron.
Is anyone paying attention online? What if you could track to see who is engaged? Who is struggling? TEDxNaperville has a conversation with Lucas Parra live on youtube.
Jens Madsen's work on eye movements measured on over 1000 people online was published in PNAS today. We show that synchronized eye movements predict test scores for online educational videos. Here are videos from the study, and here is a press release, and media reports.

Today Yu Huang (Andy) released ROAST. This open-source software makes individualized modeling of tDCS/tACS ridiculously easy. Here a video of the presentation at the NIH modeling workshop that day: starting at 3:17:00.
In our Nature Communications paper we report that a commonly held belief about transcranial electric stimulation is not necessarily true: Transcranial stimulation does not entrain brain-rhythms. The tACS community will now have to work a little harder before making claims about brain oscillations. Here are some reactions from the community, and some quotes from our collaborator in Reuters and Medscape.
New tutorial on EEG component extraction methods presented at CuttingEEG in Glasgow: Slides and code.
Commentary on new study measuring student engagement in the classroom. The Smithsonian Magazine.
Short podcast describing the brain reading work in the lap: Brain teaser.
Andy presented his validation work for TES models at the 7th Annual TMII Symposium at Mount Sinai. Here is the video.
"Plugging electrodes into your brain like 'Matrix' the movie -- that's not going to happen for a long time ... we're focused on what we can do today." -- Lucas Parra. Commentary on brain reading technology at Circa.com.
NSF award 3 year grant for "Assessing student attentional engagement from brain activity during STEM instruction".
New paper on modulation of synaptic plasticity with direct current stimulation: Kronberg et al. Brain Stimulation 2017
Transcranial electric stimulation measured in the living human brain in over 1300 electrodes: eLife paper, video, and commentary.

When your brain syncs up with others, you are more likely to remember what happened, even three weeks later: Paper and code.
Child Mind Institude released EEG and eye gaze from 126 kids and adults during multiple tasks, rest and video. Data and code free for all here. We found interesting age and gender effects on the video data.
Our study on the balance between novelty and regularity in bird song inspires analogies with human music: Research finds that birds behave like human musicians.
Lucas Parra explains how tDCS works at the the NIH symposium on trancranial electric stimulation. Here the talk, and here These are all the talks from that day.
NIH-NINDS awarded a 5-year R01 grant entiteled "Effects of direct-current stimulation on synaptic plasticity". This project will investigate the effects of tDCS on the strength of connections between neurons, which may inform the treatment of neurological or psychiatric decease.

NIH-NINDS awarded a 3-year R44 grant entiteled "Targeted Transcranial Electrotherapy to accelerate Stroke Rehabilitation". This project will test the effectiveness individually targeted high-definition TDCS as adjunctive treatment to language rehabilitation in aphasia.
Several students (at various levels including HS, UG, MS) have been playing in the lab with Human-Computer Interfaces using eye-tracking. This caught the attention of the media when it was submitted to the New York City Science and Engineering Fair: NYC teen's eye-tracking computer project, Fox 5 News.

The finding that EEG signals can be boosted by puting subjects on their head was written up here: "Getting The Position Right For EEG", Discover, (Oct 7, 2012). "Tilt your head to improve brain signals", NewScientist, (Nov 30, 2011).
Our study on measuring engagement with EEG during movies generated quite a buzz: Zombies, Twitter, And Braaiiins!: The Neuroscience of The Walking Dead, FastCompany, Co.Create blog (Nov 14, 2012) "New Research Could Help Advertisers Read Your Mind" Reuters TV, (July 10, 2012). "Your brain on horror movies" Discovery News, (July 13, 2012). "Alfred Hitchcock, Your Brain, and DARPA" Neuromarketing, (June 13, 2012). and the list goes on: Scientific American, and more.